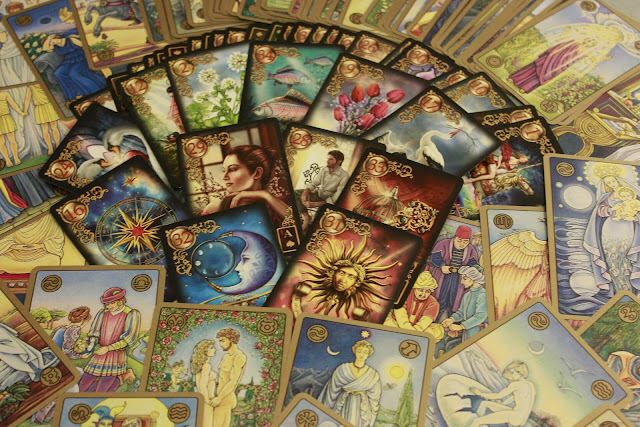 One element of writing that even advanced, professional writers often forget is the importance of freewriting. This would include sitting down for a few minutes before the real writing takes place and getting thoughts and impressions down as a warm-up exercise. In fact, it helps to think of freewriting that way: the warm-up exercise before we push ourselves into the heavy stuff.

In the past, I've tried freewriting with inspiration from household items I happened to spot around me, such as baskets or even apples. I would open a writing file and just start typing away about the color of the basket, the specific contents, or the sage green liner that was covered in a thin layer of dust. This approach helped, but one day I ran into freewriting inspiration in an unexpected place: my tarot card collection.

At a young age, I was exposed to new age elements, such as crystal balls and astrology. My mother is an astrologist, and I was always curious about how all of that worked. In my teen years, I learned how to do astrology and developed my own collection of new age items. Connecting my creative writing with tarot cards was unanticipated, but I'm so pleased that I did. There are so many ways to use these cards creatively, and even if you are not a new age fan, it might be a good idea to collect a few packs for writing inspiration. Here's what I mean. 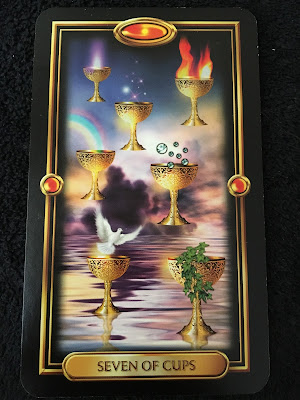 From: The Gilded Tarot by C. Marchetti

Art as Inspiration. Tarot cards act as little pieces of art. The one pictured above from The Gilded Tarot is one of my favorites. Here, we get a miniature piece of artwork to use as inspiration. Just prop it up next to you and get going. You can freewrite about the white dove, the rainbow spilling out of (or into) the gold goblet, the fire, the ivy, or any combination of these elements. I think it might be fun to write a story about the entire card! 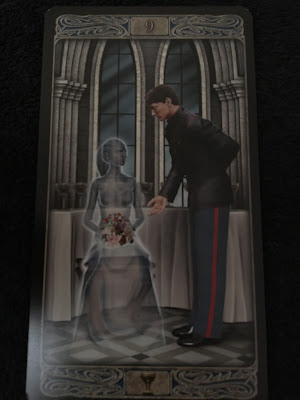 From: Ghost Tarot by D. Cozsi

Writing Prompts. Looking for story prompts to use for freewriting? Pulling out a random tarot card or going through the deck is useful. For example, look at the tarot card above from Ghost Tarot. What might the backstory be here? What happened or is going to happen between these two, a ghost and a non-ghost character? Is the ghost sad? Why does he seem to be escorting her? 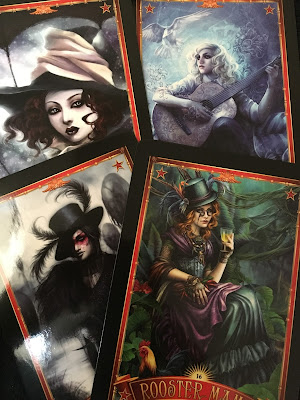 From: Divine Circus Oracle by A. Fairchild

Characters. How about freewriting for character development? Look at all the faces, expressions, and hair colors here (Divine Circus Oracle). Look at the shape of the chin in the first card, the soft hair and dark eyes in the second card, the gothic look of the third card, and the uniqueness of the redhead in the fourth card. Characters on cards are awesome for freewriting, especially when we need more details in our character descriptions. This is one of my favorite freewriting exercises.

Outdoor Themes. Natural settings on tarot cards are useful as inspiration as well. Freewriting is especially fun when using a natural theme for poetry or just short musings. Look at the water and the rocks in the first card, the mountain and tree in the second card, the autumnal elements on the third card, and the harvest setting on the fourth card. There is much to write about here!

Symbolism. Finally, another good way to get your mind thinking outside of the box through freewriting is with the symbolism found on many tarot cards. A quick, easy example is from a common card called The Star. A star can symbolize so much, such as a journey, hope, luck, a guiding light, or a bright new opportunity. Looking through the guidebooks that are included in many tarot card packs, I think you'll find that the tarot cards have specific meanings that might be used in writing. Also, the characters on the cards might be useful as archetypes in writing. The possibilities are endless.

I would highly recommend collecting tarot card packs, as they truly do inspire. As mentioned, even if you're not a new age type of person, the cards can serve as mini pieces of art, and many authors have been known to gain inspiration through artwork. Let me know how you make out with this journey, and if you need advice on card packs to acquire. I do have a vast collection!

Check back Friday for my next Wizard of Writing blog post: Sounds of the Moon: Using Music for Writing Inspiration

Pick a Color! A Spectral Breakdown of Character Traits 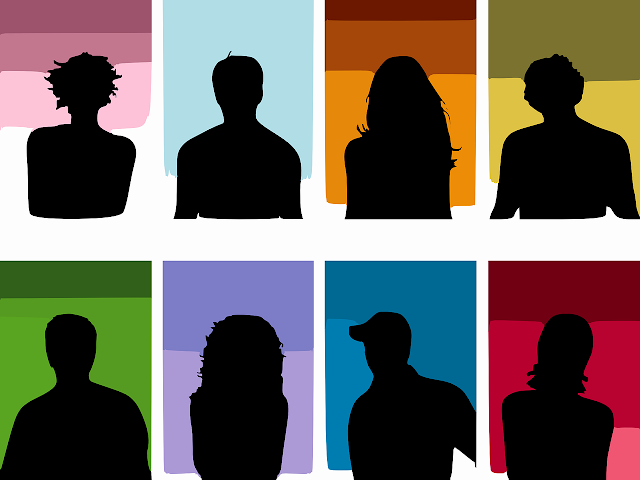 Carla Trueheart, MA, MFA
Carla Trueheart is a New England-based writer who holds certificates in poetry, romance writing, copyediting, forensic science writing, historical fiction writing, and writing for young adults. She has studied writing at Gotham Writers’ Workshop and The Writers Studio and holds an MFA as well as a master's degree in Creative Writing and English. She has worked as submissions editor for various online publications, and her poetry and short stories have been featured in The Litchfield Literary Review. Her first novel, The Ritual of the Four, was a finalist in the 2016 International Book Awards. Her newest release, Back to Blueberry Pond, is available now through World Castle Publishing. You can visit her at carlatrueheart.com